Part of my collection of postcards is this one sent to 23 Bramble Street, Coventry on the 6th September 1901 or 1907, it looks like a 1 to me from the print but looking into the bridges history it wasn't built until 1903. Sadly I can't quite make out the surname of the couple who's first names are Annie & Arthur and appears to be from their cousin Emily. The postcard contains the following text as best I can make out.

"Dearest Annie & Arthur,
I thought perhaps you would like a postcard of Leamington,
my dear sister & I were both there yesterday, it is a beautiful place but I (can't make the word out but thinks it's discovered) you have both been. I shall come over to Coventry sometime & see you because you were both so kind the last time, we are having some beautiful weather now, so we shall both be very pleased to have you both over at Melton when it is most convenient for you to come, so with love & best wishes to you both I will say,
goodbye from your loving cousin Emily" 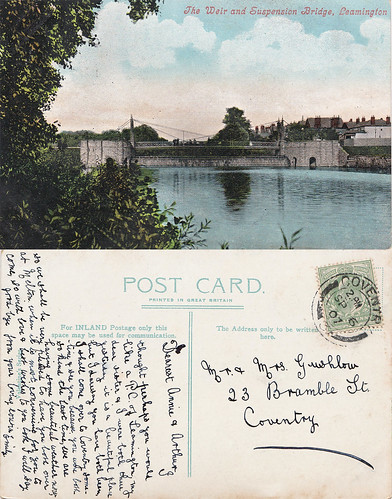 A copy of the post card without the text can be seen by clicking here.

The suspension bridge still stands today and to give it's proper name is known as the Mill Suspension Bridge, opening to the public in 1903. The bridge is Grade II listed as is the weir below and takes it's name from the site of the towns water mill which stood adjacent to the bridges site and was the towns primary source of water, the mill was demolished in 1899. The bridges design is thought to be based on the Albert Bridge which crossers the River Thames in London.

Thanks for looking, Click here to see over 1900 of my pictures on Clickasnap