Ripponden Cobbles and a Church Spire

Ripponden cobbles is a short road known as Priest Lane that runs down from the A58 Halifax Road, passing the Old Bridge Inn, crossing the River Ryburn before ending near to St Bartholomew's Church, Ripponden. The picture below was taken just beyond the Old Bridge Inn looking up towards the A58. 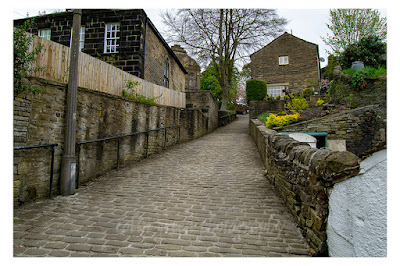 The following 3 pictures show Ripponden Parish Church or St Bartholomew's by its better known name. They were taken at differing angles.

St Bartholomew's Church occupies a site alongside the River Ryburn in what is considered the historic township of Barkisland, it is very much considered Ripponden now with Barkisland sitting atop the nearby hill overlooking Ripponden. The first place of worship to occupy the site was a small chapel which was consecrated in 1465. A much larger church was built as a replacement in 1610 and again this was replaced when a new church was opened in 1731. The 1610 church having been badly damaged by the flood of 1722 when the River Ryburn rose by over 20 foot, the flooding caused a few graves to be washed away and the deaths of 15 people who all lived nearby.

The third church to occupy the site lasted until 1867 when the roof was in such a bad state of repair the building was closed and demolished to be replaced by the current St Bartholomew's which opened in June 1870. George Shaw of Saddleworth was the architect and builder. The church underwent repairs to the belfry in 1876, when the nearby Ripponden Mill burnt down and sparks from the fire reached the belfry.  There has only been minor alterations since with windows replaced and a new organ installed. There is a local legend that says the people of Barkisland refused to contribute to the cleaning of the church clock and that is why the clock facing Barkisland is left uncleaned.

The pictures were taken on the 29 April 2017 using a Nikon d3300. They can also be seen full size, resolution and un-watermarked on Clickasnap.

Thanks for looking and please take a moment to share. All the pictures remain the copyright of Colin Green.