Reddish South Railway Station is a stop that serves the community of Reddish, Stockport. Frequently amongst the 10 least used stations in the whole of the UK, Reddish South currently has 2 scheduled stops per week both on a Saturday morning in each direction.

Reddish South opened in October 1845 when the line between Stockport and Guide Bridge was completed by the Manchester & Birmingham Railway, barely a year later the line passed into the ownership of the London and North Western Railway (LNWR) when the M&BR, Grand Junction Railway and Liverpool and Manchester Railways merged.

The station was a busy stop in it's early tears and consisted of 2 island platforms, a signal box, engine shed and large goods yard. The station was busy throughout it's first half century until trains were redirected in May 1899, reducing much of the passing railway traffic.

Reddish South continued to decline and by the 1960's, British Rail was under large scale downsizing as part of the Beeching cuts and despite many stations like Reddish South and lines like the Stockport-Stalybridge closing they survived the cuts. Despite surviving the station continued to be run down with a lack of investment with the line reduced to single track status, the 2 island platforms reduced to 1 and the the track bed filled in, the station buildings and engine shed demolished and eventually the sidings and land around the station sold off and redeveloped. 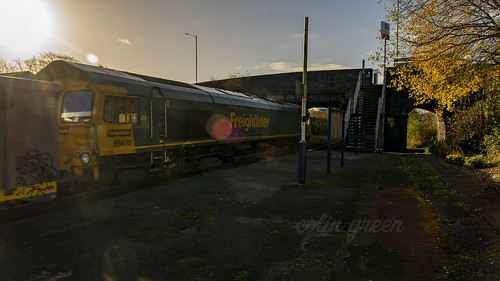 Use the arrows to navigate the album or view on Flickr. The pictures below are from the same set.

By the 1980's Reddish South had become a request stop only and even this was eventually reduced to a parliamentary service of 1 train per week at 9.22am on a Friday from Stockport to Stalybridge. In 2007 proposals were made to close the station along with Denton to the north, but keep the line open. This prompted a campaign to get more services and investment at Reddish South and a local group has added a mural, flower bed and picket fence to brighten the station up. 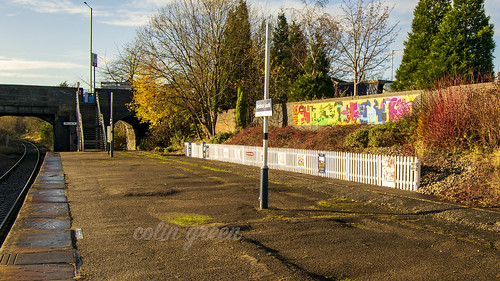 The station today suffers because of a lack of investment, no facilities and only 2 scheduled stops per week, both on a Saturday morning in each direction. Whilst there you could see plenty of house buildings adjacent to Reddish South and a large Morrisons store is located just behind the mural that are potential customers to the stop. Just 158 passengers used the station in 2019/20, an average of 3 per week, the stop is just 1 mile from Reddish North Railway Station which served 242000 in the same period, over 1531 times the amount that used Reddish South.

The pictures were taken on the 15th December using a Nikon d3300 SLR, there are a total of 8 that can be seen here, on Flickr, YouTube and Clickasnap where they can also be downloaded. The YouTube video lso features images of the much bigger station, they are public domain and creative commons licenced with credits where possible. 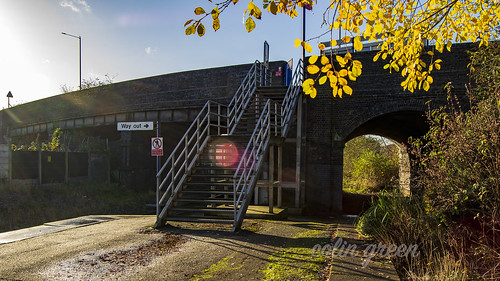 The station's only entrance. To the right is the now infilled former trackbed. 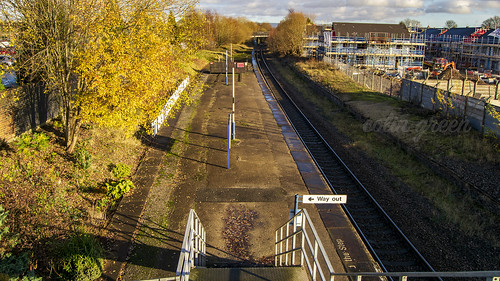 Looking down on to the station from the top of the entrance steps. To the right can be seen the overgrown former 2nd platform, the former sidings and goods yard is where the house buildings is currently ongoing. 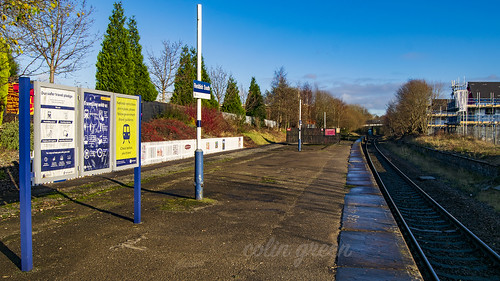 The remaining island platform looking north, the disused platform can be seen to the right.