Borders sunrise was a picture I took whilst at waiting at a farm near Kelso in October 2018. The sky was coloured with purples and reds and the farm featured a small lake that the sky reflected off. Sadly all I had with me was my LG phone but I think he picture turned out OK. It was taken on the 24 October 2018. 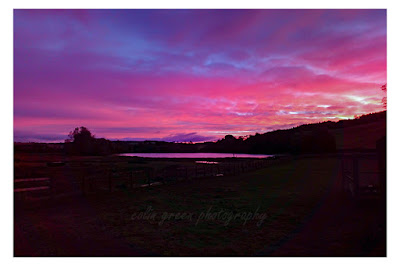 The next picture was taken in November 2013 using a Samsung Galaxy Tablet. It shows that statue of J.B. Priestley which stands outside the National Media Museum, Bradford. John Boynton Priestley was born on the 13 September 1894 in the Manningham district of Bradford. He was a novelist, playwright, screenwriter, broadcaster and social commentator, who's Yorkshire background was reflected in much of his work. He served with the Duke of Wellington's Regiment during Word War 1, being badly injured in June 1916. Despite writing before the war his first major success cam at the end of the 1920's with the novel The Good Companions. Priestley died of pneumonia on the 14 August 1984, his ashes being buried at Hubberholme Churchyard, Wharfedale. The exact location of his ashes have never been made public, only a very small number of people attending their burial. A Plaque at the church says they are buried nearby.

The statue made of Bronze, shows Priestley with his coat flapping in a Bradford Breeze. It was unveiled by his third wife Jacquette Hawkes on the 31 October 1986. The sculptor was Ian Judd. 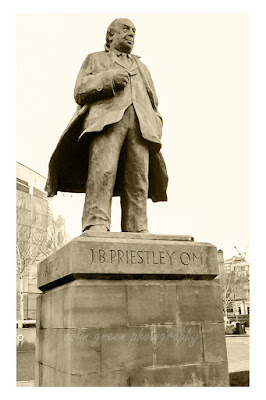 Thanks for looking and please take a moment to share. All the pictures remain the copyright of Colin Green, they can also be seen on Clickasnap full resolution, size and un-watermarked.